Call to Action: Witness Bahrain and There Is A Field

February 14 is the 5-year anniversary of Bahrain’s uprising, when hundreds of thousands of Bahrainis took to the streets calling for democracy and human rights in Bahrain–and were met by violent repression from the Bahraini regime, repression which continues until today.

March 30 is the 40-year anniversary of Land Day, an annual commemoration of land dispossession and the killings of Palestinian citizens of Israel in 1976.

Donkeysaddle Projects is inviting you to participate in global actions to mark both events!

MARCH: Participate in the Land Day Tour of our new play, THERE IS A FIELD, by organizing a performance, rehearsed reading, or “living room reading” of the play!

Looking forward to your participation in marking these two significant anniversaries, and in organizing events that support human rights and equality!

And–ways to help support both initiatives, along with all our work at Donkeysaddle Projects, can be found here!

–Charles Mudede of The Stranger (Seattle’s preeminent alternative weekly newspaper called it “one of the best documentaries I have seen this year” and said the film is “fearless, insightful, and has a big heart for those who are in this long but beautiful struggle.” (Full review below.)

–Before both screenings, we hosted a photo exhibit of Bahraini child prisoners, courtesy of Americans for Democracy & Human Rights in Bahrain. And, a lively discussion/Q&A was held after both screenings with Witness Bahrain Co-Producer Nada Alwadi, Director/Producer Jen Marlowe and donkeysaddle projects Project Manager Amer Shurrab.

–Mike McCormick interviewed Nada Alwadi and Jen Marlowe about the film and the freedom struggle in Bahrain on KEXP’s Mind Over Matter. (Link to interview here.)

—Hedgebrook hosted a Tweet Chat about the film, and about Bahrain with Nada and Jen. You can read the transcript here.

–And, to top it all off–Witness Bahrain received the Audience Award at STIFF.

It is tremendously exciting that Witness Bahrain was recognized with this award right out the gate.  But, the credit for this award goes to the audience. We are so moved by how many of you came out, supported, and showed enthusiasm for this film and, most importantly, for the struggle for freedom, democracy and human rights in Bahrain.

We hope that many many more of you will have the opportunity to see the film in the months to come. If you want to help organize a community screening, please contact Amer Shurrab. And, you can support the film’s ability to screen world-wide by clicking here.

Photo 1: Review of Witness Bahrain in The Stranger
Photo 2: Amer, Jen and Nada after the premiere at STIFF 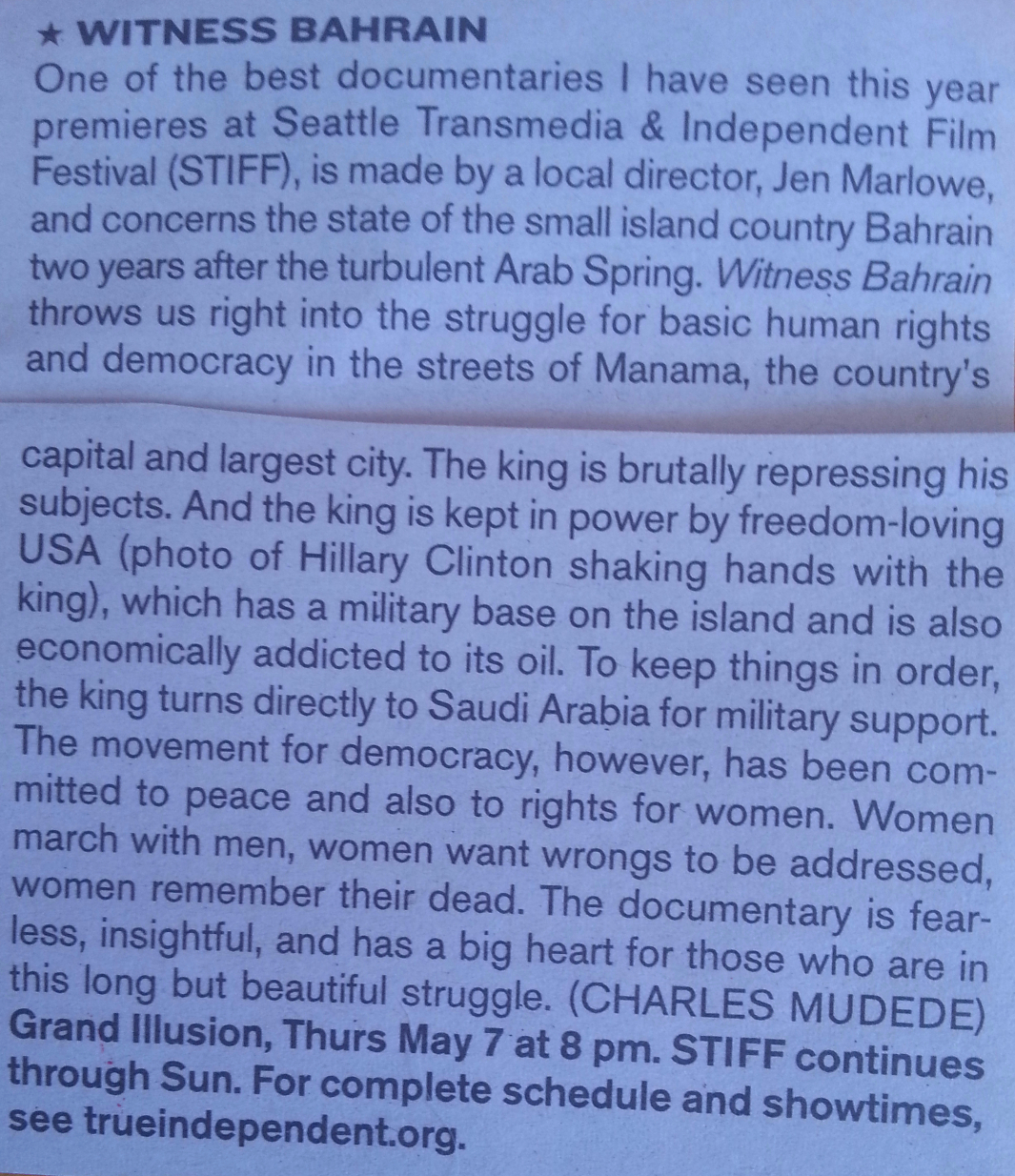 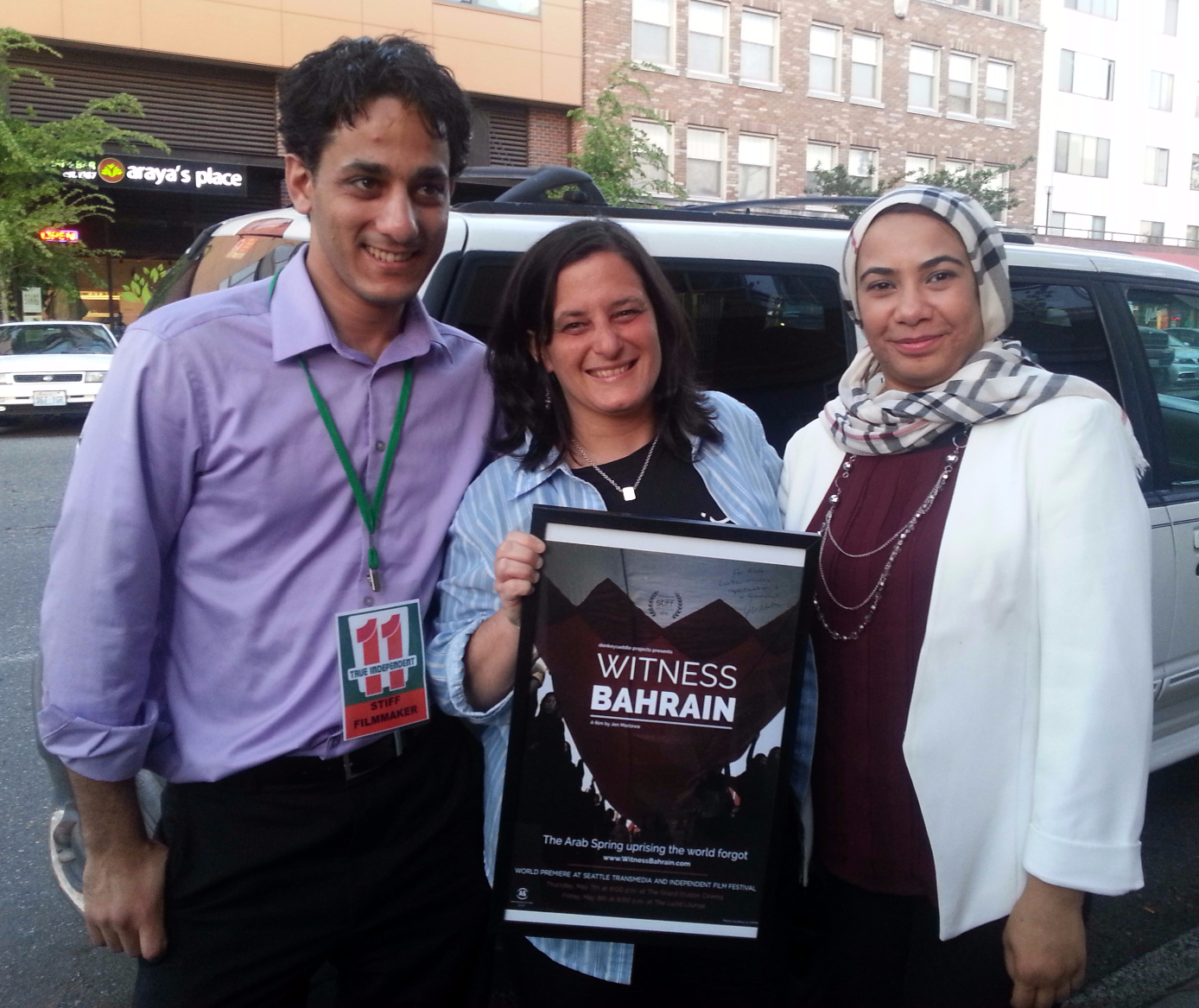 Tonight and tomorrow night, at the Seattle Transmedia & Independent Film Festival, my documentary film Witness Bahrain will be premiering.

For those of you in Seattle, I hope you will join me tonight at 8pm at the Grand Illusion Cinema, or tomorrow night at 6pm at the Lucid Lounge to watch the film and to participate in the post-screening Q&A with myself, Bahraini Co-Producer Nada Alwadi, and Project Manager for donkeysaddle projects, Amer Shurrab. (Though officially sold out, the Festival is releasing some extra tickets, so you can get them at the door!)

For those of you NOT in Seattle, you have a unique opportunity to participate in the conversation around the film by taking part in a Tweet Chat today at 3pmPST/6pmEST. Hosted by Hedgebrook, this TweetChat is an opportunity to ask questions of Nada and myself: about the film, about the ongoing repression happening in Bahrain, about the connection between the regime in Bahrain and the U.S. government.

Just use the hashtag #WitnessBahrain to follow and participate in the discussion!

I’m so very glad to be finally sharing with the world the stories of the inspiring Bahrainis that I met, struggling for democracy and human rights in the face of great repression and brutality.

Hope to see you online today at the TweetChat, and the premiere screenings tonight!

In solidarity with all those struggling for basic human rights,

The World Premiere of Witness Bahrain  at Seattle’s Transmedia and Independent Film Festival is just a week away, and I am so looking forward to sharing the film with you!

Here are some exciting updates about the premiere:

–The first screening sold out days after tickets went on sale, and the second screening that was added (Friday May 8, 6pm at the Lucid Lounge) is on its way to selling out as well! DON’T WAIT! BUY YOUR TICKETS NOW!

—The Seattle Times AND the Seattle Weekly named Witness Bahrain as one of the highlights of the STIFF Festival!

—Nada Alwadi, Bahraini journalist and co-producer of Witness Bahrain, will be at the premiere, and joining me for the post-screening Q&A. Nada was arrested by the Bahraini regime shortly after the uprising and had to flee the country. This will be a rare opportunity to hear directly from a Bahraini about the uprising and the subsequent repression.

–A moving exhibit of letters from children prisoners in Bahrain, along with their photographs, will be displayed in the lobby of the cinemas, courtesy of Americans for Democracy & Human Rights in Bahrain.

I’m so glad that Witness Bahrain is going to be shared with you.  Nabeel Rajab, a prominent Bahraini human rights advocate who is featured in the film, was recently re-arrested by the Bahraini regime and faces an unknown amount of time back in prison. Nabeel’s arrest underscores the importance and timeliness of this film. I hope Witness Bahrain will draw some critically needed attention to the ongoing repression taking place in this small Gulf nation, home of the U.S. Navy Fifth Fleet—repression that the U.S. government is tacitly supporting.

See you at the premiere!

(PS–If you have tickets for the Thurs screening but would rather go Friday, or vice versa, email me ASAP. I may be able to facilitate some sort of exchange.)

Witness Bahrain is a piercing look into Bahrain two years after the Arab Spring, and documents a reality that is as relevant (and as under-covered) today as when filmmaker Jen Marlowe was shooting the film. The film uncovers stories of doctors arrested and tortured for treating wounded protesters, nurses caring for injured youth at underground clinics, and children who were killed or arrested by riot police. Marlowe also filmed while hiding upstairs in the home of prominent human rights defender Nabeel Rajab as the police came to take him to prison because of Tweets he sent that the regime objected to. (Rajab was just re-arrested weeks ago, again for his Tweets.)

The government of Bahrain is denying entry to all but a few journalists and human rights defenders, so Marlowe had to enter the country under false pretenses and film clandestinely, and was ultimately deported by the Bahraini regime. The result is a one-hour documentary film cut from guerrilla style footage shot with a small, hand held camera, capturing the most intimate, in-depth portrayal of the Bahraini government’s violent repression of Bahrain’s pro-democracy movement to date.

Witness Bahrain is produced by donkeysaddle projects, and co-sponsored by the City of Seattle Office of Arts & Culture. Donkeysaddle projects is partnering with Americans for Democracy & Human Rights in Bahrain to promote the film.

I am thrilled to announce that the World Premiere of my new documentary film, WITNESS BAHRAIN, will be in Seattle on Thursday, May 7 at 8:00pm at STIFF (Seattle Transmedia & Independent Film Festival)!

Tickets are on sale here. I will be at the premiere and will hold a post screening Q & A, and, will be joined by Nada Al-Wadi, the Bahraini co-producer of the film!

About Witness Bahrain: The Arab Spring uprising the world forgot:
Witness Bahrain is a piercing look inside Bahrain, two years after the start of Bahrain’s pro-democracy uprising. The film follows an investment-banker-turned-activist as she travels all over Bahrain, uncovering dozens of stories, including doctors arrested and tortured under trumped up charges, nurses treating injured protestors at underground clinics, the family of a child killed by riot police, and the arrest of human rights defender Nabeel Rajab. Women explain why they protest, people pray on the remains of their demolished mosques, and youth clash daily with riot police. The government of Bahrain is denying entry to all but a few journalists and human rights defenders, so filmmaker Jen Marlowe had to enter the country under false pretenses and film clandestinely, and was ultimately deported by the Bahraini regime. The result is a one-hour documentary film cut from guerilla style footage shot with a small, hand held camera, capturing the most intimate, in-depth portrayal of the Bahraini government’s violent repression of Bahrain’s Arab Spring to date.

(Witness Bahrain is co-sponsored by the City of Seattle Office of Arts & Culture.)

Help us get Witness Bahrain out in the world widely!

Want to organize a screening in your community? Contact Amer Shurrab for details!

And–stay tuned for info about more screenings in more cities in the upcoming months!

On a somber note, Nabeel Rajab, a prominent Bahraini human rights defender who is featured in Witness Bahrain, was recently re-arrested by the Bahraini regime and faces an unknown amount of time back in prison. Nabeel’s arrest underscores the importance and timeliness of this film.

I’m so glad that Witness Bahrain is finally ready to be shared with you….and with the world.