Coming soon: THERE IS A FIELD 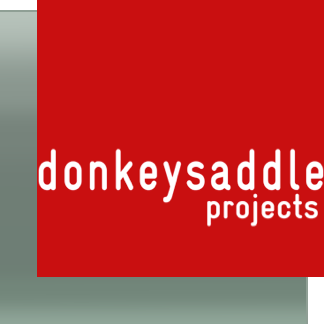 It is with great excitement that I announce:
the Land Day Tour of my new play There Is A Field!

There Is A Field is a play about Aseel Asleh, a 17-year old Palestinian citizen of Israel killed by police in October 2000. Based on interviews and primary sources collected over 15 years, the play offers a uniquely personal lens for understanding inequality as the root of state violence and impunity. Audiences throughout the United States will find particular resonance with themes raised by Aseel’s life and murder, and post-play discussions and actions will create space to further explore connections and build solidarity across universal struggles for liberation and equality. 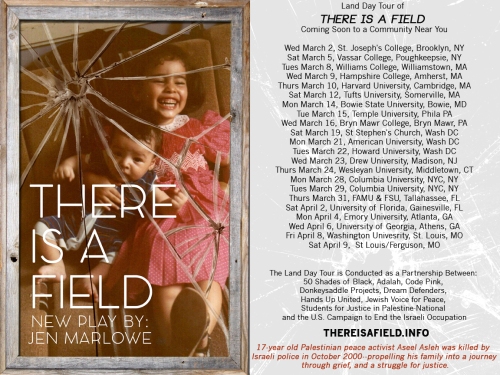 The play emerges at a critical juncture of unprecedented mobilization for the rights of Palestinians, for Black-Palestinian solidarity, and for transnational movement-building against supremacy and state-sanctioned violence. Aseel’s life and murder, which highlights both entrenched inequality and the impunity of the State of Israel, contributes to the vital and growing national conversation around the systematic devaluation of Black life in the United States.

The Land Day Tour of There Is A Field is a professional production of the play, cast and rehearsed out of NYC, that will travel to 20 schools across ten states in March and April!  The tour coincides with the 40th anniversary of Land Day, an annual commemoration of land dispossessions and the killings of Palestinian citizens of Israel in 1976.

Check out the tour schedule here, and make plans to attend a performance at a university near you! If you don’t live near a city hosting the tour, you can still participate in the Land Day Tour by organizing your own reading of the play!

And, please consider supporting the Land Day Tour with a contribution today!

Jen Marlowe
Playwright/Producer, There Is A Field

on behalf of the Land Day Tour partner organizations:
50 Shades of Black, Adalah, Code Pink, Donkeysaddle Projects, Dream Defenders, Hands Up United, Jewish Voice for Peace, Students for Justice in Palestine-National, and the U.S. Campaign to End the Israeli Occupation. 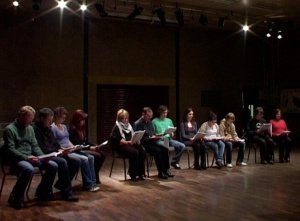 Reading of an earlier version of There Is A Field in Derry, Northern Ireland

Tagged as 50 Shades of Black, Adalah, Aseel Asleh, Black Palestinian solidarity, Hands Up United, Jewish Voice for Peace, Palestine, Students for Justice in Palestine, There Is A Field, U.S. Campaign to End the Israeli Occupation