Please take a moment to read my most recent piece, up today at Al Jazeera America.

Please also take a moment to circulate. This crisis is urgent, and under-reported.

GAZA CITY — Until very recently, Salameh Abu Kash earned his living as farmer. Abu Kash, a heavyset man with thick eyebrows and a clipped beard, lives in Wadi Gaza, a valley in the central Gaza Strip. The wetland here was known for its biodiversity, but after construction of a sewage treatment plant was delayed in 2011, excrement from nearby refugee camps and towns began to be diverted through the valley en route to the Mediterranean Sea.

“They brought sewage for us and for our children, and we can’t sleep anymore,” said Abu Kash in Arabic the following year. “Farming is ruined. The plants are diseased. There are flies, worms, and it is spreading.” Animals and birds were soon replaced by swamps of sewage, swarming flies and thriving bacteria. Residents began to suffer from an increase in allergies, inflammation, fevers and weakened immunity, Abu Kash said. Disease-ridden mosquitoes feasted on the community at night. The stench was overpowering.

It is with great excitement that I welcome Amer Shurrab as the new Project Manager for donkeysaddle projects.

Amer’s first official day was Monday–and he has already jumped in with both feet, taking on the many-pronged responsibility of maximizing our projects’ impact and reach.

Amer brings to this work expertise from his recently completed MA degree in International Policy Studies and his MBA in International Management from the Monterey Institute of International Studies.  He brings his passion when he speaks publicly about the devastation his family experienced (two of his brothers were killed during the 2008/9 attack on Gaza, and four of his cousins during the 2014 Gaza war) and about the ongoing violations caused by occupation and siege.

Will you join me in welcoming Amer to donkeysaddle projects by making an online $10 monthly donation in his honor, or, a one-time $25 donation? (Or, to send a check, click here.)

Your gift will enable Amer to start his work knowing that his vision of a world where everyone’s dignity and everyone’s rights are accorded equal importance is a vision that we all share.

Welcome aboard the saddle, Amer! 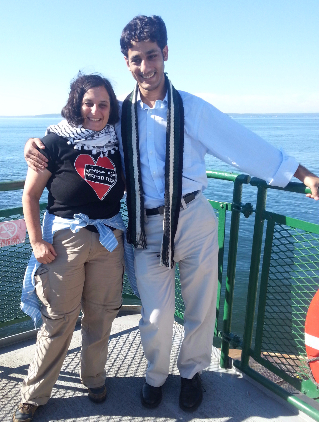 I don’t think I will ever forget what I saw and what I heard in Shejaiya, an eastern neighborhood of Gaza city that was reduced to rubble during the 2014 attack on Gaza. I will be posting here–all still in raw form–some of what I saw there, and some of the painful stories I heard.

Sabrina had just finished telling Fadi and me the devastating story of a mother pregnant with twins who was killed by a bomb, which ripped open her womb. Sabrina got on the scene to document right after it happened–she saw the killed mother and fetuses. She broke down crying as she recounted it to us…but yet here she is minutes later: strong, resilient, smiling. Sumoud.

I saw no reconstruction at the site of this destroyed clinic. What I did see was ongoing clearing of rubble. The system: Men and boys loaded the rubble onto carts drawn by donkey or horse. Then, the cart was pulled onto the main road, and the rubble was transferred onto a giant truck. When full, the truck drove somewhere. To do something with the mountains upon mountains of rubble collected:

The only time I have ever broken down and cried during an interview was when speaking with Talal and Leila Al Helo. 12 members of their family killed in an airstrike on their home. Here is Talal, on the rubble of the home in which 12 of his family members were killed:

I promised Talal and Leila that I would do all I could to make sure that their story was known and that people remembered those babies, and knew their names. Maram. Karam. Kareem.

Leila showed me a video of Karam and Kareem, talking to each other in that special twin baby talk, filmed the day before they were murdered. Watching that video– Fadi and I both lost it.
Look at the pictures, and, please, say aloud those babies’ names:

On July 23, 2014 the Israeli military launched a ground invasion in Khuza’a, in the eastern part of Khan Younis. Dozens of civilians were killed, including a paramedic trying to evacuate the wounded. Destruction in Khuza’a–of homes, of lives, of hope for the future–was overwhelming. I went to Khuza’a with Yasser Abd A-Ghafour, a human rights defender from the Palestinian Center for Human Rights, who had been on the ground documenting the atrocities in real-time. He showed us around and narrated for us the horrors that took place during the war.
My colleague and friend Fadi Abu Shammala took the following photos as I filmed at the entrance of Khuza’a, trying to take in the scope and scale of devastation and human suffering in front of my camera–and my eyes:

Yasser showed us some of the worst hit areas and told us what happened as we drove through the main street, including a disabled girl being killed from an airstrike while, wheelchair-bound, she was unable to flee:

Notice the pain in Yasser’s eyes as he tells us what we are seeing outside the car window:

We were there during a wind and sand storm; as you can see in the billowing of the tent:

Many of you met the Awajah family through my film “One Family in Gaza,” telling their story from the 2009 attack on Gaza, in which their home was destroyed (the destruction began while they were still in their home) and their 9-year old son, Ibrahim, was shot at close range and killed.
When the family started rebuilding their home in 2012, the kids wanted the new home to be built with two doors.
“Two doors, Daddy,” the kids insisted, “So that when the Israelis destroy the home again, we can run away.”
Here is the Awajah family’s new home after the 2014 attack on Gaza. Complete with the escape door:

Below, are Kamal and Wafaa Awajah on the rubble of their twice-destroyed home. (Wafaa told me she had not cried at this second destruction of her home. Until this day, when I asked her to tell me about what happened.) :

And–hanging laundry on the ruins–a reminder of the resilience of Gaza:

At breakfast one morning, he said (out of the blue): “The Israelis shot me.”
When he saw my startled look, he repeated it: “The Israelis shot me.”
“You’re the 2nd Ibrahim,” his father Kamal quickly corrected him. “It was your brother that the Israelis shot, not you.”
In this tiny child’s self-narrative, he heard his family talking about how Ibrahim was shot, and, since he is Ibrahim, he believed it must have happened to him…

At night, Kamal made a bonfire outside the caravans that the family received just the week before I arrived, next to the rubble of their home:

The young children fell asleep by the firelight, and were then transferred into the caravans. (Kamal called me a few days after I left Gaza to tell me that the caravans were destroyed in last week’s storm. They are back in the tent.)

Nothing signifies “boyhood” so much as boy chasing puppy in play. But this 9-year old boy (Diyaa) is chasing his puppy past the giant crater left by an F16 bomb behind the tent where the family is now living:

Kamal and Lulu walk down into the crater, demonstrating its depth:

We had a birthday party for Diyaa, who turned 9 years old. The kids made seesaws out of the rubble and lumber:

And, in the midst of trauma and heartache, there is love. Kamal gives little Ibrahim a kiss, from the rubble of their home:

Building towers from rubble in Gaza

My second-to-last morning in Gaza, I visited a kindergarten that had been destroyed. The kids were provided with a different building for most of the day, but many of the kids still gather in the destroyed kindergarten, as it is a more convenient location for the parents to drop off, and then together they walk to the new school. While waiting? They build towers out of the rubble.

The kids are walking from the old kindergarten (destroyed) to the new one.

And this. Their faces. These signs.

Just got back to the U.S. day before yesterday after 2.5 months in Palestine/Israel, including 9 very intense days in Gaza. Didn’t post much while there…but now that I’m back, will be sharing many photos, many reflections; here, on Twitter and on my Facebook. More polished/produced pieces of writing and filming will come later. For now, the raw stuff:

Below: This photo of me was taken in Shejaiya, east Gaza City, on the rubble of what used to be a clinic. I have seen a lot of devastation in my life, but I have never seen anything like what I saw in Shejaiya. My camera (much less my brain) could not hold the scope and scale of the destruction:

Below: I met these kids as they were climbing in the ruins of their destroyed home, in Beit Lahiya, Gaza–very close to the border with Israel. Most amazing: they wanted to play and clown and have fun. Like all kids.

View from the donkey's saddle
Blog at WordPress.com.